As you are all fully aware of, I spent approximately 95% of the summer eating. So I thought it would only be right to share some of my best summer eats with you all, and hopefully inspire you all to the level of gluttony I achieved.

Enjoy! (Especially because I likely won’t have time to blog in the next coming weeks as I get acclimatized back into my work routine.)

This new Middle Eastern restaurant has been getting lots of hype, and rightly so. They nailed it with this salad of kale, sweet potato, lentils, walnuts, and beet tahini. It was filling from the vegan protein, and was tangy and savory AF. Note: there is also goat cheese on this salad, but I fear all things goat, so I omitted. I’m sure it’s even more delicious with the cheese.

I eat a lot of carbs, so I consider myself a carb connoisseur. This gnocchi wouldn’t be something I normally order, probably because I don’t think I like Gorgonzola cheese, but these little babies were cooked to perfection, and the sauce wasn’t nearly as rich as I anticipated (but still plenty rich). Basically this dish was a solid 10/10 for me, and I highly recommend it, and various other pastas and pizza from this Italian restaurant.

This avocado toast was to die for. It had hummus on it for a little zip, and it was essentially a salad on bread, with tons of fresh veggies. I put bacon crumble on top for $2 (I think), and it added some much needed protein, saltiness, crunch, and just general happiness.

While all the other dim sum restaurants we used to frequent north of the city have gone out of business, Yu Garden has been around for quite some time. We were reluctant to try it, because it’s very authentic Chinese food from Shanghai. They’re known for their soup dumplings, and other than the odd scalding here and there from the various times we’ve gone this summer, I have nothing but good things to say about this place. The food is incredible and you will leave very very very satisfied.

What can I say? This delicious fruity concoction pairs well with gluttony, carbs, and cheese. I drank this on their adorable patio multiple times this summer. Runner up for best cocktail goes to Radisson Admiral Hotel (249 Queens Quay W., Toronto), for their delicious white sangria as well…

Best pizza – Sorelle and Co. (various locations across the GTA)

Never in a million years would I have thought that the best pizza I’d have this summer would be a vegan one! I did eat a lot of pizza this summer, so that’s saying a lot. This Sorelle and Co. pizza was topped with tons of fresh veggies, and was perfectly balanced and not greasy like most of the pizza I traditionally consume. I highly recommend it!

Once you eat your ice cream smothered in decadent chocolate, you can’t go back. There was way too much ice cream in here and I had trouble finishing it, but the rich coffee flavoured chocolate (pictured right) was to die for! 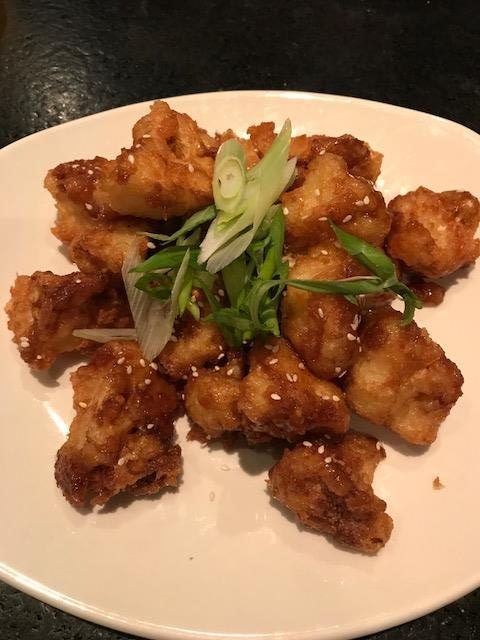 So this summer I won a whopping $300 gift card to the Keg from an Instagram food account (Shout out to ToFoodies)! I don’t eat steak/don’t really care much for meat in general, so this cauliflower app was the real MVP for me. It was fried and tasted like Kung Pao chicken. It was incredible!

Feast your eyes on this baby for a moment, will ya? It only cost me $10, but it was well worth every penny. You’d think the frosting mixed with the chocolate sauce, chocolate chips and vegan cookie dough on top would be a bit much, but somehow I managed to devour the entire thing. Pro tip: I recently tried a basic cinnamon bun there and was disappointed. It didn’t fill me with the same kind of happiness. So my suggestion is if you’re going to go there, go hard and splurge on something extra.

The sushi at Tomo is fresh, high-quality, and super delicious. Pictured are the dynamic roll (above), and the spicy beef roll (below). The service is amazing too!

Welcome to the gates of hell, friends.

I actually think there are ways to eat at restaurants with young children and still enjoy yourself. Want some tips? Yes, I think you do. [A word of caution: many of my tips will lead complete strangers to judge you and call you a mediocre mom behind your back. If you’ve made your peace with this, proceed. If you’re holier than thou and want to maintain a public image of a perfect parent, this is where you close the window.]

Ideally the cocktail will be the approximate size of a child’s face, so you can cover it up and pretend they’re not there. There are two small issues with this, however. The first is that you can still hear them. The second is… 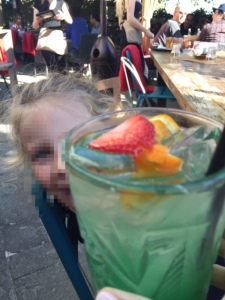 Tip 2: Dine with other families

I highly recommend going out for meals with other families. This way, the children can entertain themselves (read: run amuck, dance, disturb other people’s meals, almost pull heat lamps, umbrellas and various other heavy things down on themselves) and you can theoretically eat your meal while it’s hot. Theoretically. If you get nasty looks from other patrons, remind them you’re not giving your children iPads instead, and the people will be instantly appeased and praise you for your amazing parenting techniques. 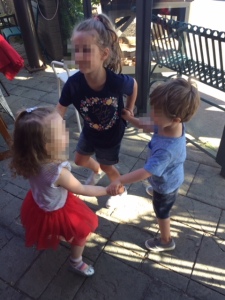 If you order your children anything other than chicken fingers, fries, pizza, or mac and cheese, they won’t stay seated longer than 30 seconds. Let them get juice/chocolate milk wasted, let them have dessert, but most importantly, let them eat nothing. It doesn’t matter in the grand scheme of things, and kids’ meals pack up beautifully for lunch the next day.

If the weather is good, patio dining is always an A+ choice when you’re with kids. First of all, fresh air is so good for children. Secondly, when they inevitably spill their milk and drop 92% of their meal on the floor, you can sleep better at night knowing the rain will wash it away and/or you’ve fed some adorable critters.

Tip 5: Order all the things

You will need to carb load for the energy to wrangle up two extremely sugared up kids and get them to bed at a semi-reasonable time. That extra slice of pizza will single handedly fuel your mad dash through the house chasing a naked toddler refusing to put on his diaper before he goes to sleep.

I hope you found all my tips helpful and that you’ll find the strength within to venture out for dinner with your kids now. Takeout is really gross guys, am I right? So go enjoy a meal hot and fresh, and thank me later. XO, The Athleisure Teacher/Mediocre-st Mom